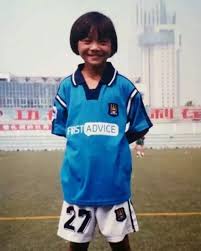 In January 2013, I was first called up to the national team, at the age of 17. I went to the training team to prepare for the Big Four tournament. At that time, I didn’t have any confidence. But, the coach still trusted me and said that the team needed a player like me.

I trained pretty well until the tournament. In the first match against Canada, I was a substitute. When the game had 30 minutes left and the score was 0-0, the coach told me to change into the pitch. I was so worried I almost resisted the order. “Don’t let me in the yard,” I thought. I bring anxiety to the field. I could only run and chase the ball, I couldn’t think of anything. I almost never touched the ball. 20 minutes later, I was replaced.

In football, being substituted and replaced is rare. That usually means the player has been a major disappointment. We lost 0-1. After the battle, I went back to the hotel to take a shower and take a nap. I was too ashamed. The only positive thing was that I didn’t have to tell my family about the match. But the whole family knew, when the match was broadcast on national radio. With a country as densely populated as China, many people will definitely see my performance.

But this time, no one criticized me. Actually everyone said to me that I should not worry because this is just the first match. The coach said he still trust me. A few months later, I and the Wuhan Club members were trained in Korea, preparing for the Chinese Games. I played so well that I caught the eye of a coach there. He wanted to sign contract with me. It is so interesting to be concerned by a foreign team.